ArXiv (http://arxiv.org/) has been available for some years for storing preprints of articles on Physics, Mathematics, Computer Science, Quantitative Biology, Quantitative Finance and Statistics.

A newer development is BioRxiv (http://biorxiv.org/) for preprints related to Biology. This archive has a section dedicated for Plant Biology. I found some interesting preprints in it.

It will hopefully become an important resource for our research community.

Add method clean() for removing out-of-range spectral observations.
Add method fshift() for shifting the zero of the scale used to express spectral data based on a summary value calculated by applying a function to a region of the same spectrum.
Add 'geocode' formal parameter to all functions related to sun angles.
Clean-up code and vignette. Update vignette. 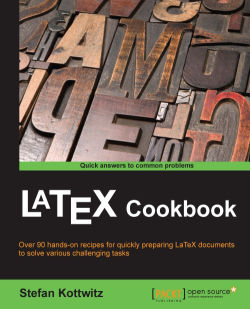 Do you use LaTeX for typesetting? Do you already know the basics of LaTeX? Then a book just published by Packt Publishing will make your life a lot easier!

I haven’t yet tested any of the code snippets, but the book gives recipes for 90% of what I normally do, but in most cases going a few steps further. It also gives recipes for doing things that I have wanted to do for some time, but until now had been too time consuming to find good instructions for.

If I had had this book at hand since January, it would have saved me quite a few hours of Googling, and I would have been able to avoid the typesetting compromises I made because of lack of time.

One of the virtues of the book is that it is not encyclopedic: it is based on a relatively small set of packages and classes that work well together, each one covering a relatively broad range of needs. The result is that although the book provides recipes for “gourmet cooking” at the same time it should be useful and comprehensible to relatively inexperienced LaTeX users, as the author supplies a gradation of recipes from simple to advanced.

I need to qualify the previous paragraphs by saying that I started using TeX and LaTeX more than 30 years ago, and I have been regularly using them since then. I have typeset my PhD thesis, many manuscripts, an edited book, a journal, conference posters, overheads for conference presentations and for use in teaching and still I am sure I will find this book useful on a daily basis.

Disclosure: I have bought and paid for this book myself, although I have in the past received free review copies of a couple of other books from the same publisher.

Add support for multi-channel spectrometers. The changes should not affect any existing scripts for single-channel instruments. However, it requires a recent version of the runtime from Ocean Optics (Probably API version 2.40 or newer, as this was used for testing).

Add support for "when.measured" and "where.measured" attributes to spectral objects of all the classes defined in this package. Add methods setWhereMeasured(), getWhereMeasured(), setWhenMeasured() and getWhenMeasured(). The first two methods are compatible with the output of ggmap::geocode() and the last two with POSIXct objects as returned by many functions in package lubridate, such as lubridate::now() and lubridate::today(). All these methods are implemented for both generic_spct and derived classes, and generic_mspct and derived classes.

Implement methods to ‘get’ and ‘set’ attributes of summary objects of spectra with name, semantics and argument signatures identical to those used for spectra.

Backwards compatible except for the changes to the format of the summary object returned for spectra. However, the structure of such objects was not documented and they are very rarely used in ways for which this would matter.

photobiologyInOut 0.4.0 (major rewrite with changes in functionality and naming)

This is a major update, not backwards compatible, as names and formal parameters of all functions have changed. Trimming is no longer supported (should be done as a separate operation).

The new "when.measured" attribute added to the classes defined in package photobiology, described above, is set automatically when this information is available in the read-in file.

Internally we now use package readr as much as possible, which should speed-up reading of files and also allow many different kinds of files like URLs to the handled.

The functions for Ocean Optics files now read the number of pixels from the file header rather than having this number hard coded, and hopefully will better adjust to different instruments and settings.

Functions for reading multiple spectra now return collections of spectra. (Functions that saved the spectral objects constructed from the data read from text files on disk back to disk as R dara files have been removed.)

New functions for reading daily spectral exposure data from files returned by models from FMI have been added.

Not backwards compatible, all old user code making use of this package will need some rewriting. Such rewriting should be straightforward.

We use cookies on our website to give you the most relevant experience by remembering your preferences and repeat visits. By clicking “Accept”, you consent to the use of ALL the cookies.
Do not sell my personal information.
Cookie SettingsAccept
Manage consent

This website uses cookies to improve your experience while you navigate through the website. Out of these, the cookies that are categorized as necessary are stored on your browser as they are essential for the working of basic functionalities of the website. We also use third-party cookies that help us analyze and understand how you use this website. These cookies will be stored in your browser only with your consent. You also have the option to opt-out of these cookies. But opting out of some of these cookies may affect your browsing experience.
Necessary Always Enabled
Necessary cookies are absolutely essential for the website to function properly. These cookies ensure basic functionalities and security features of the website, anonymously.
Functional
Functional cookies help to perform certain functionalities like sharing the content of the website on social media platforms, collect feedbacks, and other third-party features.
Performance
Performance cookies are used to understand and analyze the key performance indexes of the website which helps in delivering a better user experience for the visitors.
Analytics
Analytical cookies are used to understand how visitors interact with the website. These cookies help provide information on metrics the number of visitors, bounce rate, traffic source, etc.
Advertisement
Advertisement cookies are used to provide visitors with relevant ads and marketing campaigns. These cookies track visitors across websites and collect information to provide customized ads.
Others
Other uncategorized cookies are those that are being analyzed and have not been classified into a category as yet.
SAVE & ACCEPT
Powered by